To purchase the 928-H4-Cap, visit our on-line store.
Useful resources: 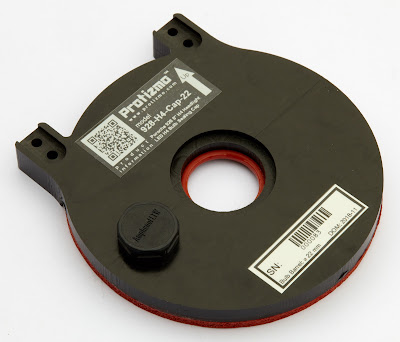 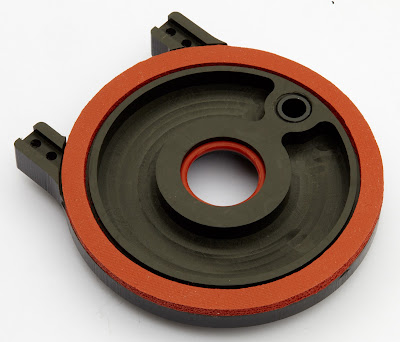 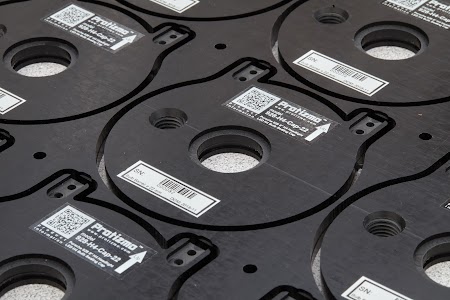 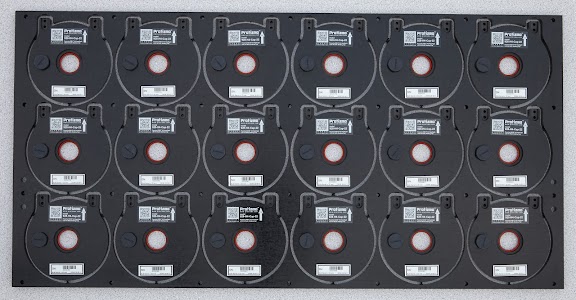 If you are in the USA, you may have already upgraded your Porsche 928's 8″ H5 headlights to the widely-believed-to-be-superior 8″ H4 headlights. Or you may — especially if you are outside of the USA — have a Porsche 928 that was originally equipped with 8″ H4 headlights. Either way, the next logical step in headlight upgrades is likely to be replacing the original halogen H4 bulbs with LED-based H4 bulbs. This LED H4 upgrade is becoming increasingly popular for a number of reasons, among them:

Despite the advantages of LEDs over halogen bulbs in this application, though, there is one problem that's not so easy to overcome: you will discover that the cap that seals the original halogen H4 bulb is not at all suitable for use with the H4 LED bulb. When you remove the cover on your halogen-H4-equipped headlight, you will see something like this: 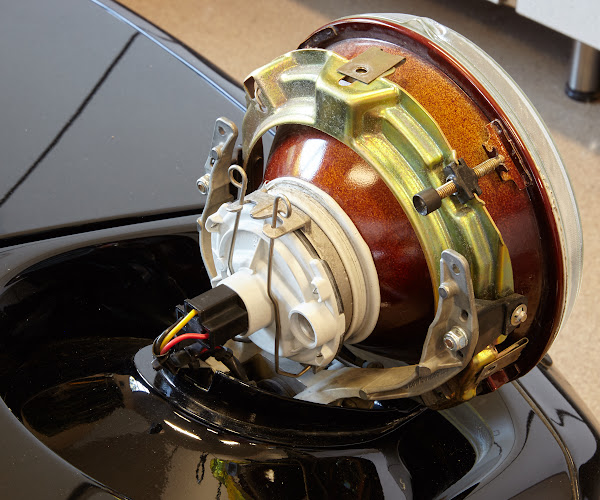 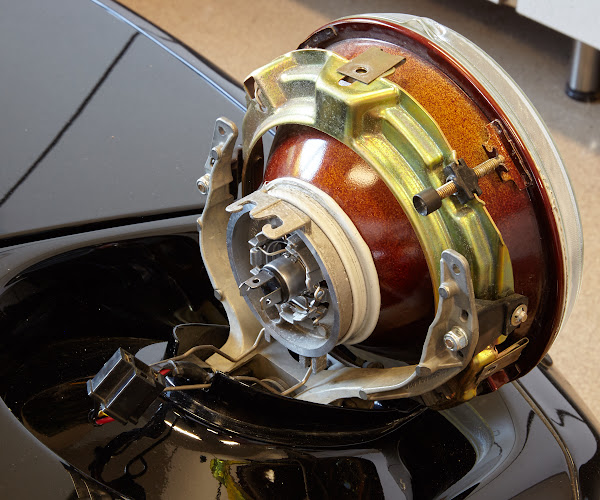 If you remove that bulb and replace it with an LED H4 bulb like this (unplugged, with the heat sink temporarily removed) … 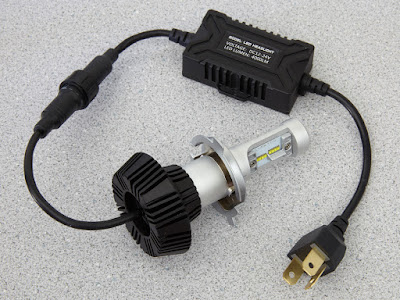 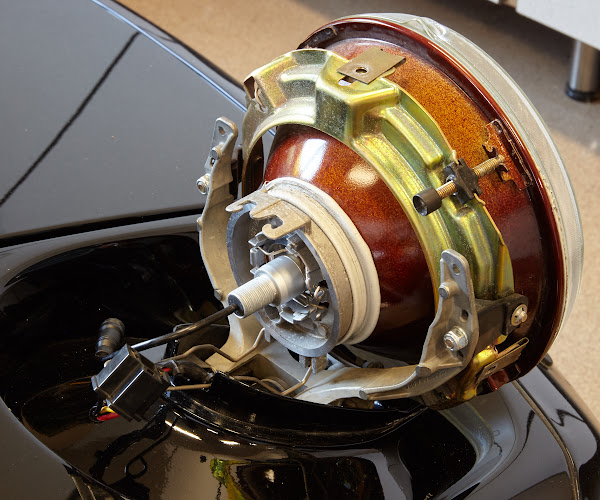 … then you will find that you cannot reseal the back of the bulb with the cap; it's just not at all compatible.

It's not uncommon at this point to think, "Well, I just won't seal it." Put on the heat sink, plug the LED H4 bulb into the LED H4 driver module, plug the LED H4 driver module into the H4 socket on the car-side wire harness, and finally, try to fasten the LED H4 driver module to something with something crude like nylon ties and let it go. Not sealed, and rather messy looking. After a few years, it's likely that the headlight glass and reflector will start turning cloudy, due to the contaminants in the air. Compare the clean headlight on the left to the cloudy one on the right; the one on the right is the result of running it unsealed for few years. It looks even worse when illuminated at night, and certainly has a detrimental effect on projected beam brightness as well. 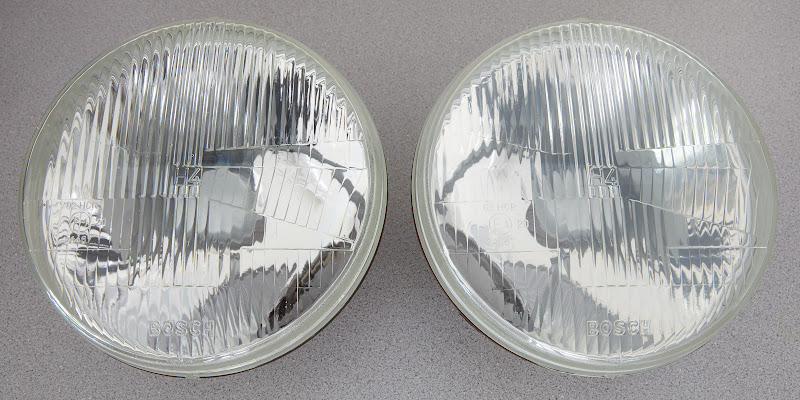 The 928-H4-Cap family was designed from the ground up to solve exactly the problem described in the previous section. Due to the variety of different LED H4 bulbs, we expect over time to introduce variants of the cap that are carefully designed to seal the bulbs, each of which might have different gemoetries requiring different hole sizes, and might also have other clearance issues. 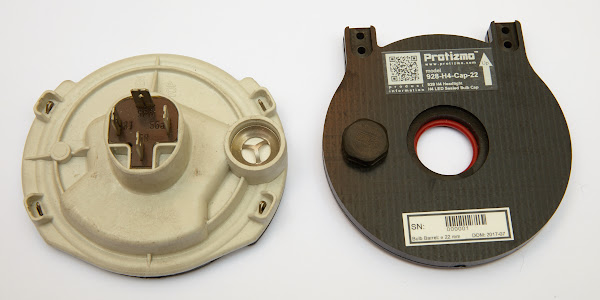 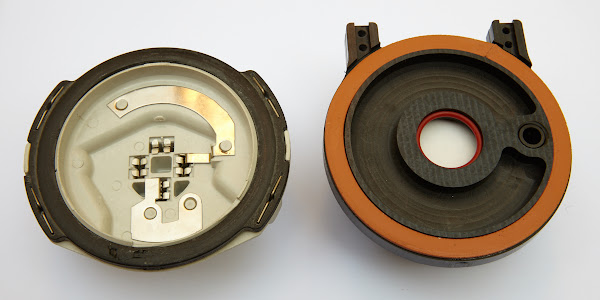 The cap seals the LED H4 bulb on the smooth part of the bulb's barrel; this is visible in the photo below, where the LED H4 bulb is positioned in the cap at the same depth it would be after installation into the headlight assembly. 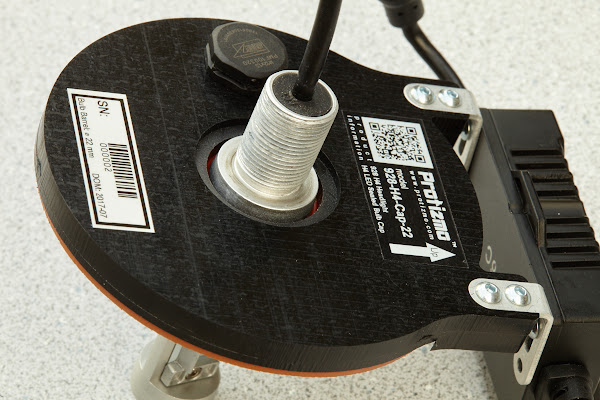 The 928-H4-Cap-22-Kit-A provides a pair of caps and the hardware you need to mount the LUMILEDS H4 LED driver shown earlier on this page. 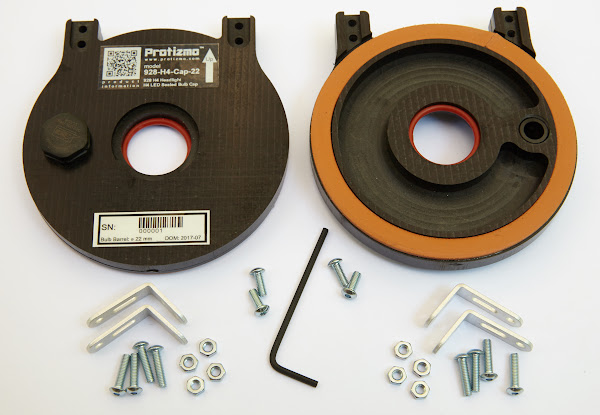 You first attach your H4 LED driver module to the cap using the brackets and other hardware supplied with the kit. 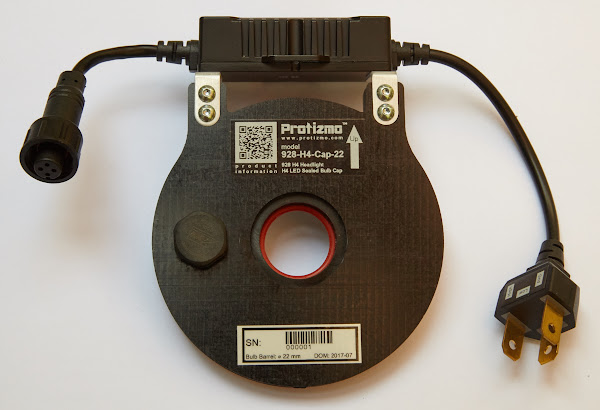 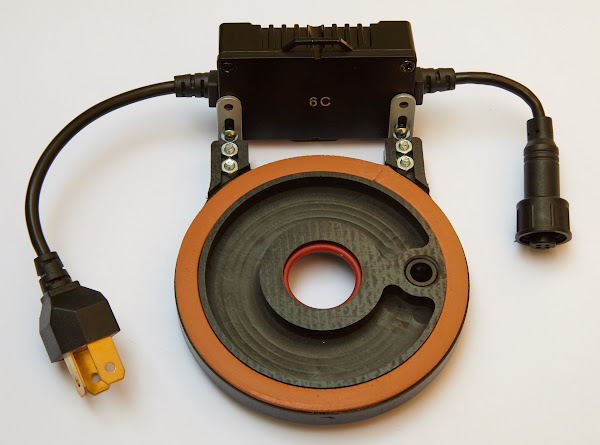 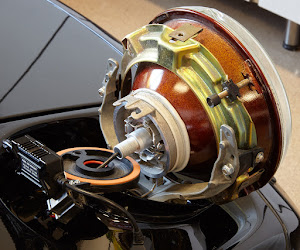 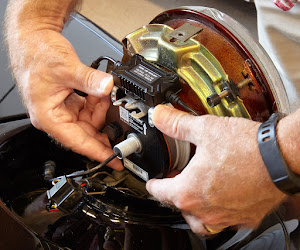 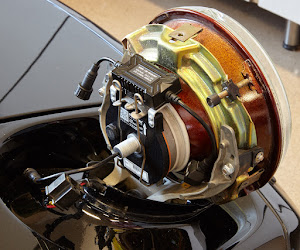 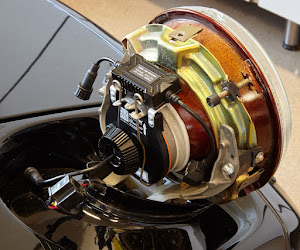 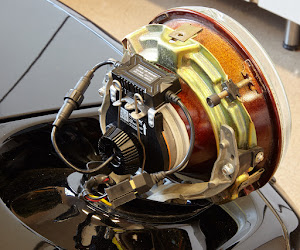 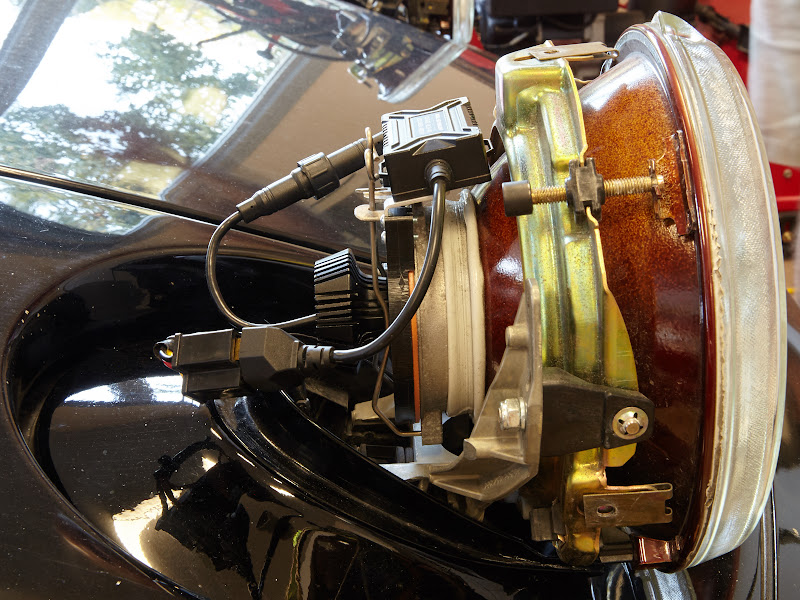 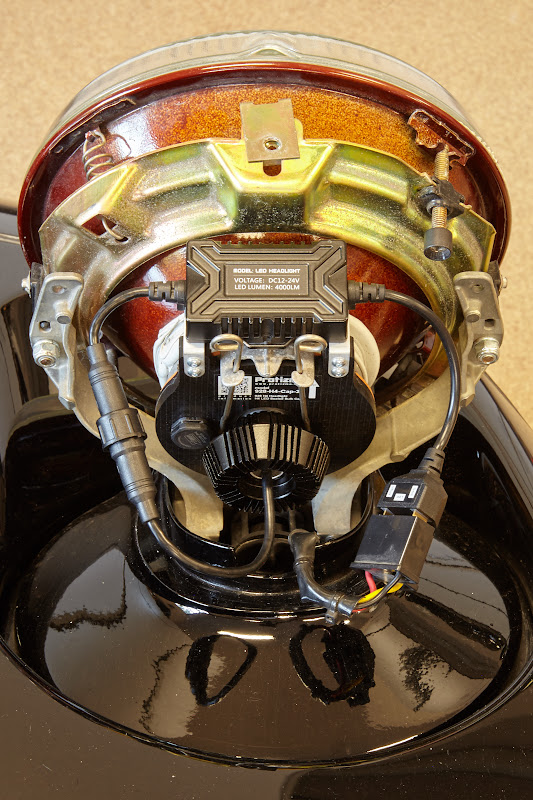 With some optional additional hardware, the 928-H4-Cap-22-Kit-A can be used with the Philips LED-HL [≈H4] X-tremeUltinon LED gen2 (Philips product code 11342XUWX2).

The additional hardware includes some straight extension brackets to accommodate mounting the driver module (which has a 51 mm hole spacing instead of the 56 mm hole spacing of the standard mounting brackets) and related fasteners. It also includes plastic ramp tools that are temporarily placed over the threaded part of the bulb barrel during installation of the 928-H4-Cap-22 sealing caps; without the plastic tool, it is very difficult—if not impossible—to get the sealing cap over the bulb barrel without dislodging or deforming the sealing cap's O-ring. 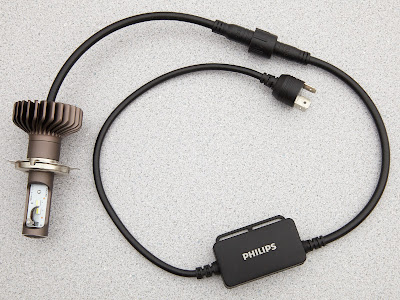 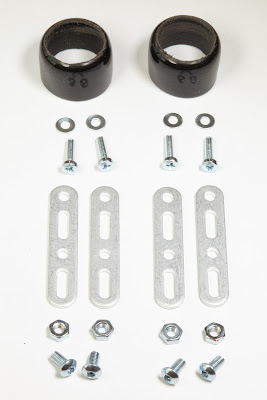 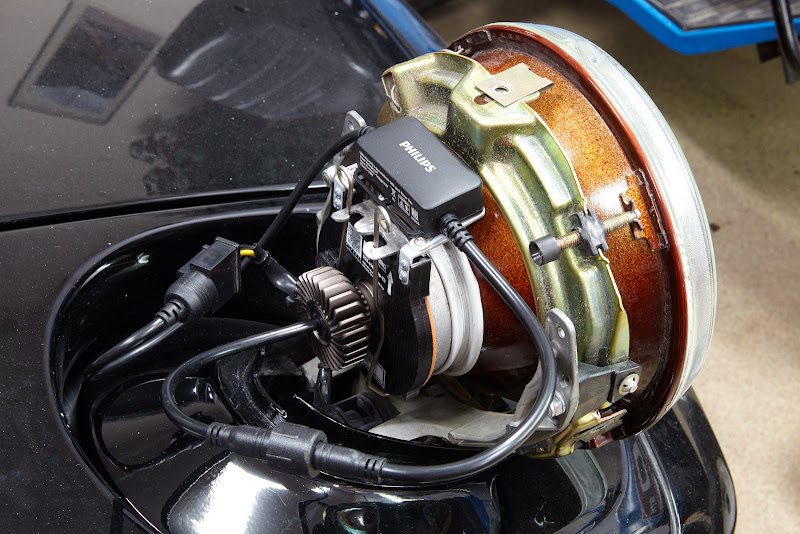